Britain’s Burberry is set to lose its long-serving Chief Marketing Officer, Sarah Manley, who joined the luxury brand back in 2001, just one month after Christopher Bailey’s entrance into the top spot.

Coinciding with Bailey’s last runway show for Burberry last week, Manley is reportedly packing her Burberry bags too, with a departure date slated for July’s end, as reported by FashionNetwork.com.

While neither Burberry nor Manley have made a comment on the departure news, it is believed that the executive desires to take a break after seventeen years with Burberry. Manley’s departure has evidently been prompted by Bailey’s leaving too.

No hints have been given as to who might replace Manley either.

Manley joined Burberry in 2001 as global director of public relations, before being promoted to vice president, and then senior vice president of marketing. In 2008, Manly was named Burberry’s Chief Marketing Officer, where she oversaw a now 200-strong communications team in London.

Major brand achievements linked to Manley include building the Burberry brand globally via elaborate events such as the holographic show, exhibition and store opening combinations in Beijing and Shanghai.

SEE ALSO : Burberry Japan to close all beauty stores before 2018

Manley was also involved in building Burberry’s burgeoning digital presence, growing its social media following and providing content that surpassed that of its competitors in terms of creativity and authenticity. Last week, social media analytics firm NetBase released its 2018 Luxury Brands Report, indeed naming Burberry as third in its overall ranking of the top ten luxury brands on social media, behind Louis Vuitton and Land Rover. 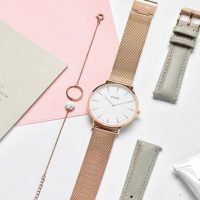