In partnership with his local partner Bluebell Group, Italian luxury group Brunello Cucinelli has open a new store in Marina Bay Sands on May 14th confirming its presence in Singapore after a first opening in Paragon’s mall on Orchard road in 2015 The Italian brand sells women’s and men’s fashion and accessories. Although known for its luxurious cashmere apparel, the brand has expanded to include non-cashmere fashions including light fabrics, swishy silks, tender suedes and shearling, gentle flannels, leather goods and accessories.

During a staff meeting in March, the 62-year-old fashion tycoon Mr Cucinelli, creator of a thinking person’s luxury brand built as much on principles of human dignity as hand-knit cashmere announced a bonus of $550 per employee, per year, to be spent on books, theater tickets, art exhibitions, and the like.

It was just the latest of Cucinelli’s philanthropic endeavours. Having grown up watching his father work a dehumanizing factory job, he was determined to prove that capitalism and humanism could coexist when he started his business, in 1978. He has created an environment that is a beacon in a frenzied era: His employees don’t punch a clock, they get 90-minute lunch breaks, they’re required to leave at 5:30 p.m., and they’re discouraged from e-mailing after hours. “There is a mutual respect that everyone lives by,” Mr Cucinelli says.

Bluebell is the owner of retailinAsia 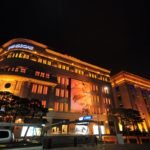