3 reasons why Singapore’s mall vacancies are so high

Singapore mall vacancies rose to the highest level in a decade in the third quarter as an oversupply of shop spaces added to muted spending by shoppers.

A gauge of mall vacancies rose 0.6 percent to 8.4 percent in the three months ended Sept. 30, even as rents declined 1.5 percent in the quarter, data from the Urban Redevelopment Authority showed. That’s the highest vacancy rate since Sept. 2006, according to data compiled by Bloomberg.

The Urban Redevelopment Authority in 2014 started including food and beverage, entertainment and fitness outlets to its retail space data, which it backdated to the first quarter of 2011, according to an e-mailed statement. Prior to 2011, the statistics only included shop space.

Demand for shopping space is being dented as consumers rein in spending amid slowing growth and buyers increasingly turn to shopping online. Singaporeans are among the most tech-savvy spenders in Asia, with a greater percentage shopping online than customers in Hong Kong and Malaysia, according to data from MasterCard.

That’s converging with a rising supply of mall space, which threatens to further squeeze rents. Singapore will add almost 4 million square feet of retail space over the next three years, according to data from Cushman & Wakefield.

Singapore’s retail market is also reeling from the impact of China’s slowing economy, and a pullback in spending by tourists, especially those from the mainland. Tourism spending fell for the first time in six years in 2015, even as tourist arrivals rose.

It’s not just the retailers feeling the heat. Office landlords too are struggling to maintain rents amid rising supply. Office vacancies rose to the highest in more than four years despite rents sliding 1.1 percent in the quarter. Prices of office space decreased 0.4 percent in the quarter compared with a 1.5 percent decline in the previous three months. Betatron to offer US$30,000 in seed funding to five Hong Kong start-ups
Next Article 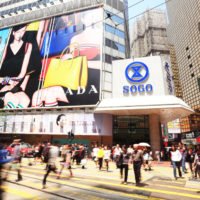