The world’s biggest IKEA store will open in the Philippines in 2020.

The Swedish furniture giant will open a 700,000 sq ft outlet – nearly double the size of a typical IKEA store – at the SM Mall of Asia in Manila Bay.

This is equivalent to the size of more than 150 basketball courts, said Christian Rojkjaer, IKEA’s Southeast Asia managing director.

The two-storey Manila store will also feature a warehouse, an e-commerce facility and a call centre.

The Swedish retailer will spend an initial US$134 million to build, stock and staff the store.

“Philippines is a very young country. I think the fact that the average age is 24 years makes us believe in our glorious future here,” said Georg Platzer, who will reportedly manage the Manila store.

He added that IKEA may expand in the Philippines following the opening of the Manila store.

Earlier this year, IKEA opened its first store in India, sparking traffic jams on surrounding streets as people visited the retailer in droves. Moschino launches limited edition for HK only
Next Article 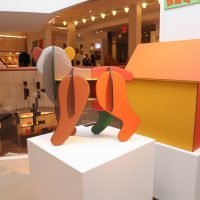