Indonesia has significantly improved its position in the Global Retail Development Index by leaping from 12th position in 2015 to a new high fifth position. China and India are still the countries with the most attractive retail business taking first and second, followed by Malaysia and Kazakhstan.

The consulting firm AT Kearney created the index in 2001 to measure the attractiveness of the retail sector in developing countries. It includes three main criteria namely population, country risk, and time pressure.

AT Kearney partner Hana Ben-Shabat said Indonesia’s recent policies of loosening barriers in the retail sector including e-commerce and foreign investment were regarded as positive to investors amid the negative growth average of 2.3 percent in the last three years.

“Local and international retailers are speeding up expansion plans,” she said on Monday in Jakarta, citing Indomaret, which planned to open 1,600 stores after the 1,560 new stores last year and United Arab Emirates’ Lulu that would invest US$500 million over the next five years.

As market saturation would increase, Hana continued, existing retailers were experimenting to capture the niche market. Matahari Putraprima has launched a premium supermarket Foodmart Primo in June 2015, while Transmart Carrefour has expanded to restaurants, retail chains and entertainment.

With the increasing usage and number of smartphones, retailers are boosting up their e-commerce. Happy Fresh has recently acquired $12 million to fund its e-commerce expansion, while Alfamart has rebranded its alfaonline.com into alfacart.com by including third-party products.

More recently, Korea and Japan-based retailer Lotte Group and Indonesia’s Salim Group have announced that they will create a joint-venture to develop an e-commerce and logistics system. Salim and Lotte would hold a 50-50 share of the platform. 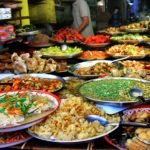