Located on the ground floor of Grand Indonesia’s West Mall, the EA7 store has two spaces — one for men and another for women.

The luxury brand specializing in technical clothing for swimming, tennis, training and yoga will retail its full sportswear and apparel, as well as accessories and sneakers, all on display in the central area.

Inside, the store boasts modern and innovative interior design. Geometrical shapes with modular and versatile wall bays are washed with white with contrasting black details,
making for a bright, bold space and the perfect setting for the high-end sports products.

EA7 Emporio Armani is homing in on Asia with its business strategy. EA7 Emporio Armani is the official supplier of uniforms for the Italian Olympic and Paralympic team for Tokyo 2020, putting its innovative and stylish apparel in the public eye for the duration of the two-week international summer sports event.

Located in the Indonesia’s prestigious Central Jakarta, Grand Indonesia mall opened in 2007 and retails a wide range of fashion and sports apparel, as well as restaurants and
entertainment choices.

International brands include Seibu Department Store and Thailand’s leading department store, Central, which is the first one in Indonesia. Other brands include Ace, MuJI, Forever21, Cotton On, H&M and Victoria’s Secret, as well as Zara — the Spanish brand’s biggest store in Southeast Asia.

Grand Indonesia is divided into East Mall and West Mall. The pair is linked by the Sky Bridge and covers a total area of 263.226 square meters with 141.472 leaseable floor space.

Coca-Cola’s 70th anniversary at The Venetian® Macao
Next Article 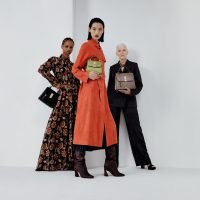