Singapore retail sales declined 1 per cent in March from a year ago, according to figures released by the Department of Statistics (Singstat), hurt by department store and food retail decreases.

The figure was a vast improvement on February with this latest monthly retail sales figure easing from the revised 9.9 per cent fall last month, according to Singstat. It also beat private economists’ median prediction of a 2.2 per cent fall, in a poll by Bloomberg.

March’s total retail sales value was estimated at S$3.8 billion, with online sales making up about 5.3 per cent. Sales figures refer to the value of retail goods or food and beverages sold to consumers during the month, excluding taxes such as Goods and Services Tax.

Most retail segments registered a fall in March. By category, optical goods and books saw the biggest decline of 6.4 per cent, while food retailers recorded a fall of 5.7 per cent from the same period a year ago. Likewise, department stores saw a 4.6 per cent decline.

However, some categories registered year-on-year increases for the month. Medical goods and toiletries were up 2.8 per cent in March, as well as supermarkets and hypermarkets, up 0.9 per cent.

Sales of food and beverages also went up by 0.7 per cent in March compared with the same period last year. As did restaurants, with fast food outlets seeing the biggest jump, soaring 6.1 per cent.

Wearing apparel and footwear was stable for the month of March, up 0.2 per cent, offsetting a 4.6 per cent dive in the watches and jewellery segment.

Singapore’s retail sales have been lacklustre since October 2018, except for a 7.6 per cent year-on-year jump in January this year. 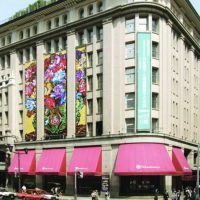