Hong Kong has long been a city of malls. It is the world’s most mall-dense place, with about one mall per square mile, and it proudly bills itself as a shopping paradise. Not only are malls places to eat, shop, and play, they are also placed at the intersection of pedestrian flows, connecting office buildings, residential blocks, and major transit hubs. In short, malls are at the center of everyday life.

Hong Kong has also historically been a city of protest. As a place with liberty but not democracy—citizens enjoy rights like the freedom of speech and assembly, but not a popularly elected government—protests become the most effective way of expressing the people’s will at scale.

From annual pro-democracy marches, massive demonstrations like the Umbrella Movement of 2014 and the ongoing wave of anti-extradition protests, Hong Kongers are experts in taking to the streets.

Now, those two identities of malls and protest have converged to transform the materialist glitz of private shopping centers into rugged sites of public demonstration.

For over seven consecutive weeks, Hong Kong’s protesters have demonstrated against a hated extradition bill that would have allowed the city to send suspects to mainland China to face charges.

The government was forced to suspend the bill after an unprecedented outpour of popular anger, though officials have so far refused protesters’ demands to completely withdraw it. Meanwhile, the popular movement has grown to include broader demands for greater democracy and an investigation into police brutality.

As protesters have marched on the streets, sometimes occupying major roads for hours, shopping malls have perhaps inevitably been pulled into the fray.

Nowhere was this seen more clearly than in New Town Plaza, a luxury shopping mall in the suburban district of Shatin.

On July 15, a peaceful rally escalated into scenes of police storming into the mall, where they fought protesters against a backdrop of shuttered Lululemon and Estée Lauder stores as civilians out enjoying a Sunday evening fled in shock.

Officers in riot gear charged up escalators, using batons and pepper spray as they beat their way toward protesters and leaving blood-stained floors in their wake. People also hurled bottles and umbrellas at police officers from upper levels of the mall, and some officers were seen slipping and sliding because the floors were so slick with pepper spray.

In the aftermath of the clashes at New Town Plaza, protesters accused Sun Hung Kai Properties, Hong Kong’s largest developer and the operator of the mall, of allowing riot police inside and facilitating the violent crackdown—claims that the company denied.

Unsatisfied with the response, hundreds of protesters gathered outside the mall’s customer service centre for two consecutive nights, demanding answers.

They plastered walls, counters, and storefronts at the mall with colorful Post-It notes, creating yet another impromptu “Lennon Wall,” versions of which have sprung up all over the city as a way for people to spread their message. When mall staff took down the notes, protesters used helium balloons to display their grievances.

But the root of protesters’ ire against the mall runs deeper than just the chaotic clash, and extends to broader resentment against the political and economic system that many Hong Kongers feel is rigged against them.

“The mall quickly evolved into a major site of protest because it now comes to represent something more specific: the corporate power of developer Sun Hung Kai, which is seen by protesters as a ‘colluder’ with the government and police,” said Cecilia Chu, a professor of architecture at the University of Hong Kong and who has written about the symbolism of Hong Kong’s malls.

Sun Hung Kai did not respond to a request for further comment.

Not all property developers have been targeted, however. Protesters have rallied behind Pacific Place, a luxury mall in downtown Hong Kong. During a major protest on June 12, hundreds of protesters took refuge there behind its glass doors as, and used the mall as a temporary depot of protest materials.

One protester later thanked Pacific Place for saving their lives, and others took to an online forum to praise Swire, the developer operating the mall that has deep roots (paywall) in the city dating back to Britain’s colonization of Hong Kong.

At another march in July—billed the “Silver Hair Rally” for elderly citizens to show solidarity with the protest movement—Pacific Place allowed demonstrators to march through the mall on their way to the local government headquarters across the road. Staff politely guided the senior protesters into the mall and up the escalators, as the crowd cheered and clapped to show their support for Swire and Pacific Place.
Swire did not respond to a request for comment.

But on July 21, things took a dark and troubling turn when a large group of armed thugs beat protesters and civilians indiscriminately at a train station in Yuen Long, a suburb close to the mainland Chinese border.

Like many train stations in Hong Kong, this one connected directly to a shopping center—also developed by Sun Hung Kai—and photos later showed blood stains streaked across the mall’s floor.

The next day, all shops in the mall were closed from the early afternoon amid rumors of further planned mob violence, and the entire neighborhood resembled a ghost town. Yoho Town, the mall in question, released a statement (link in Chinese) after the attacks and said it was “shocked and sorrowful” at the events, adding that as soon as it heard about the violence its staff immediately called the police, but those calls were repeatedly unanswered.

As anger continues to boil and as the government continues to refuse protesters’ demands, it appears likely that demonstrations will stretch on in the weeks ahead—and shopping malls may well keep occupying a central role in the movement, if only as places of air-conditioned respite from the summer heat.

“The targets of these protests are fluid and always moving, and so are their sites. And at the moment, the malls are one of them,” said Chu, the professor. 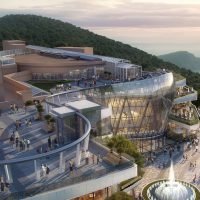 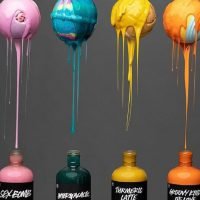