Reselling sneakers is an emerging trend among Korean millennials

A growing number of Korean millennials are making a fortune by purchasing and reselling limited edition sneakers and luxury goods, according to industry officials.

According to the data from online thrift store thredUP, the resale market is projected to grow from 28 trillion won (US$24 billion) in 2018 to 48 trillion won in 2020.

“There has been a changing perception toward the resale market. People no longer regard it as thrift shopping, but view it as collecting scarce and limited edition goods,” a thredUP official said in a report.

In particular, sneaker fans are willing to pay thousands of dollars for hard-to-find shoes and trade up quickly for the latest models.

Rare or limited-edition collaboration designs can cause prices to jump by a couple hundred dollars or by a thousand, according to industry officials. Many “sneaker heads” wait for certain sneakers for months, and when they finally drop in stores, they are sold out within minutes.

“The reselling culture has become an emerging trend among millennials. To meet their increasing demand, we are planning to launch limited-edition sneakers and collaboration shoes in 2020,” a Lotte Department Store official said.

In January 2019, Lotte released limited edition all-white Nikes and Converse Chuck Taylor 70s, and they were sold out within three hours after the opening.

The collaboration between designer J.W. Anderson and Converse in December is another example of this phenomenon. The product, which was priced around 100,000 won at that time, is now traded at more than 300,000 won, according to Lotte.

Online sneakers marketplace XXBlue launched in September, and it turned out that 87 percent of the registered members were millennials aged between 18 and 27, the company said.

“One can buy something for 239,000 won from somebody who doesn’t know what they have and resell it for 2.4 million won because it’s really worth that,” the company official said. 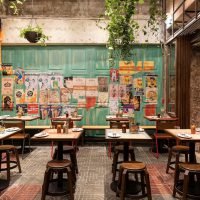