Sfactory, a culture complex in the hip Seongsu-dong neighborhood in eastern Seoul, has organized an exhibition inspired by colors, titled “Museum of Colors,” targeting 20- and 30-somethings.

Makeeva’s dreamy photographs hang in a room dubbed The Black Plaza, decorated like a banquet hall, each work featuring a woman in a fairytale-like dress.

With 724,000 followers on Instagram, the Russian photographer calls herself “modern converter from ordinary to magic.” She creates deeply saturated photographs that tumble on the fine line between dream and reality.

A long banquet table set with tableware from upscale Italian furniture brand Kartell is placed in the middle of the riin where visitors are welcome to sit at the table and pose for fairytale-like photos.

Next is The Aurora Forest, subtitled “A Brilliant New World of Light,” where Yoon Sae-rom’s color acrylics hang from the ceiling.

Yoon was originally a furniture designer, who received attention for his Crystal Series, a series of acrylic paintings inspired by his childhood in the Philippines.

His work is followed by a zone created by Pantone, which announces the Pantone Color of the Year each December. Here, the authority on color chronicles its process of deciding on the color of the year and shows its chosen colors from past years, leaving empty a spot for next year’s color.

Sky Island – All Blues in the World features photographs by Scottish photographer Lynne Douglas. Douglas is based on the Isle of Skye off northwestern Scotland.

Inspired by the color blue, she uses her camera in an experimental way, producing contemporary photography artworks.

“I intend to create new worlds with their own rules. By combining vivid colors, strong lines, geometric patterns, lights and shadows in my compositions, I try to redefine the purpose of architectural elements,” says a quote from the photographer printed on the wall.

The exhibition runs until 15 March at Sfactory in Seongsu-dong, eastern Seoul from 10 a.m. to 7 p.m. from Tuesdays to Sundays. 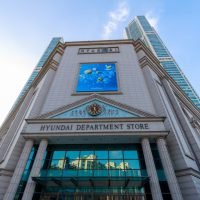