The retail industry is seeing sales recovery, owing to the ongoing nationwide discount promotional event in South Korea to revitalize the domestic economy, which has been suffering dampened consumer sentiment amid the COVID-19 outbreak.

Major retailers saw sales grow during the first weekend of the government-led K-Sale period, locally dubbed “Donghaeng,” which kicked off.

The sales growth marks its highest point since January, when the country confirmed the first COVID-19 patient.

The retailer said the sales of its suburban outlets also shot up by 55 percent.

The K-Sale event will be held until 12th July, with the participation of major retail giants and traditional outdoor market operators to offer special discounts at both online shopping platforms and brick-and-mortar stores.

Lotte Department Store revealed its women’s fashion segment saw an 8 percent on-year increase in sales during the weekend, rebounding from minus 29 percent in May. Sales of men’s fashion also rose by 8 percent.

The golf and outdoor category saw a 26 percent increase in sales, and other sports goods saw an increase of some 20 percent compared to the same weekend last year, the department store operator said.

Sales of imported luxury brands saw a notable surge of 93 percent, as the retailer held a clearance sale of duty-free products that had been left in stock during the weeks-long social distancing period.

Duty-free products are usually banned from domestic sales, but the Korea Customs Service has temporarily allowed duty-free operators to sell goods that have been in stock for more than six months, to support the industry.

Lotte launched duty-free goods on its sales channels, and it held a “preopening” event for the luxury goods a day earlier at three of its department stores and outlets across the country. The retail giant said it sold US$4.4 million of luxury items, constituting 60 percent of the products it had prepared.

Lotte Mart witnessed a 7.2 percent increase in sales during the three days, compared to a week earlier, the company said.

By products, fruit sales were up 6.4 percent, vegetables by 3.3 percent and livestock products by 13.6 percent. 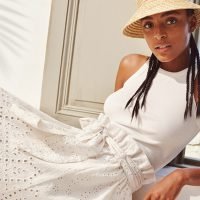 Featured Articles of the Week
Staff Writer 19 hours ago