Online shopping is experiencing a growth surge, accounting for close to 20 percent of all retail sales in the first quarter of this year.

Retail transactions in the three months to March totaled 96.56 trillion won (US$85.83 billion), a growth of 4.7 percent from the same period a year before, according to Statistics Korea. The sum of online shopping was 18.21 trillion won, or 19 percent of the total.

This represents a 19.6 percent leap from the same quarter of the previous year and the largest total since related record keeping began in 2010.

The ratio of online sales to all retail sales has grown in double digits every quarter since the fourth quarter of 2012, when it was 10.2 percent. It reached 17.7 percent in the last quarter of 2016.

The mobile sector played a critical part in contributing to online shopping, accounting for 59 percent of the sales in March.
“Mobile shopping has grown with the wide penetration of smartphones, and shopping malls have also been pushing their mobile platforms,” a Statistics Korea official said.

Such high performance of online sectors contrasts with sluggish figures in the overall retail market. Retail sales gains that reached over 10 percent in the first two quarters of 2011 shrank to 0.6 percent by the second quarter of 2013. They bounced back somewhat to 3-5 percent last year.

Sales at department store, the strongest source of offline shopping, have backtracked. The monetary amount of transactions fell 1.5 percent in January from a year before, 5.6 percent in February and 3.5 percent in March. The figures showed a decrease of 2.2 percent in April and 4.6 percent in May. 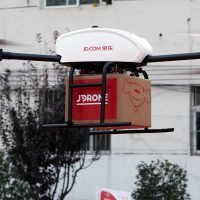