Hotel Shilla, Hotel Lotte and other duty-free operators are calling on the Incheon International Airport Corp. to temporarily lower the rent it charges them as they have been struggling with rapidly falling profits amid the fast spread of COVID-19 here, company officials said.

But the operator of Incheon International Airport, Korea’s main gateway, has refused the request, and instead suggested a reduction in business hours, prompting complaints from the companies at a time when several airports around the world including Singapore Changi Airport have already decided to lower rents imposed on duty-free stores as part of support measures.

The Korea Duty Free Shops Association (KDFA) is planning to ask the IIAC again to lower rents, but it remains uncertain whether the IIAC will decide to do so, considering it did not accept the request to reduce rents when the nation was hit by the SARS outbreak in 2003 or the MERS outbreak in 2015.

Duty-free operators each pay more than 100 billion won (US$82.2 million) in rent a year to operate their stores at the airport. But their profits have almost halved this year compared to the same period in 2019 following the outbreak of the contagious disease that has considerably reduced the number of inbound and outbound travelers.

This led the companies to ask the IIAC to lower rents, at least temporarily, by changing its charge calculation method ― the KDFA brought the issue to a meeting with business leaders, presided over by Finance Minister Hong Nam-ki, Feb. 7.

“The number of tourists from China and other countries has rapidly fallen following the coronavirus outbreak,” an official from a duty-free operator said, asking not to be named. “Some companies even face a situation in which they have to pay more rent than sales.”

The IIAC, however, sent an official notice to the duty-free operators, Feb. 17, suggesting a reduction in business hours and late-night operation, virtually refusing their request for support.

Another official from a duty-free operator said such a suggestion was considered “unrealistic” as a reduction in business hours would lead to a sales decline while rent continues to be paid as a fixed cost.

The KDFA is currently collecting opinions from duty-free operators, before again requesting a lowering of the rent charged.

Regarding the issue, an IIAC official said, “After we sent the official notice, there were no further developments. We are still reviewing the matter with the Ministry of Land, Infrastructure and Transport.” 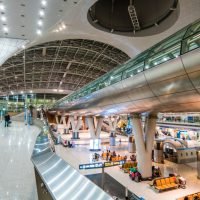