The first LEGO® Certified Store operated by Kidsland International Holdings Limited will be officially opened at the Shoppes at Venetian this spring and is set to bring unimaginable surprises to this amazing city that has more than 400 years of history with an enchanting mix of Eastern and Western cultures.

LEGO®’s one-stop unique shopping experience, plus the iconic design and decoration instore, will create memorable memories with all Macau fans, guests can curate their own selfies with the magnificent decorations in store and celebrate together at the grand opening of the first LEGO® Certified Store.

LEGO® Mosaic walls are always one of the key highlights and draw attention for LEGO® Stores. this mosaic wall area portraits Largo do Senado (Senado Square) and inspired by its debut at the new LEGO Store. The installation integrates creativity in LEGO bricks together with Macau’s landmark Senado Square as background, to present the reality world through LEGO bricks and minifigures representing tourists and residents in Macau.

The piece is constructed using more than 200,000 pieces of LEGO bricks to present the iconic black and white Portuguese pavement. The mixing of the Portuguese pavement and the distinctive Portuguese heritage buildings on both sides has come together to shine a truly unique style of Macau town centre.

The large-scale 3D LEGO build made for the LEGO® Certified Store in Macau is 1.4 meters tall, and it is built with 86,800 pieces of LEGO® bricks and took 436 hours to complete. The build is composed of a Minifigure, the skater boy holding Portuguese tarts in his hand in front of the famous tourists’ spot, Ruínas de São Paulo (Saint Paul’s Ruins). It enchants the story of the integration of Eastern and Western culture described in the design of Ruínas de São Paulo.

With the help of Greater China’s first LEGO® Certified Professional, Andy Hung, the first LEGO Store in Macau is going to present one of the top 8 scenes, the 5 houses complex with the style of Portuguese architecture featuring its outstanding beauty and important architectural value. After 3 weeks of effort, it is officially live in the new LEGO Store in Macau. 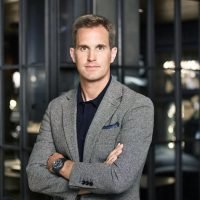