More than 100,000 sq ft of retail space in shopping malls and street-level shops have been taken by brands focusing on athletic gear or sports-related services over the last 12 months, according to a report from JLL.

“Sports-focused brands were very active in the leasing market during the first six months of this year,”the report said.

Upscale shopping malls such as IFC in Central and Pacific Place in Admiralty, where luxury brands such as Gucci and Chanel traditionally cluster, have also joined the push for having more sporting goods retailers in their facilities. 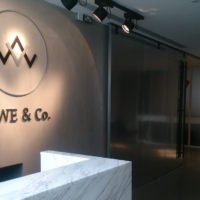