Despite a steady flow of mainland Chinese tourists to the territory, there is scant relief for Hong Kong retailers as these consumers are tightening their purse strings.

November retail sales fell 5.5% on the year to $36 billion Hong Kong dollars ($4.6 billion), extending a 21-month streak of decline. The contraction, however, was widened from a 4.1% fall in September and a 2.9% dip in October, official data showed on Tuesday.

Broken down by category, sales of electrical goods and photographic equipment fell by the biggest margin with a plunge of 27.3% year-on-year, followed by that of motor vehicles and parts that saw a 15.5% decline. Sales of watches and jewellery that are popular among mainland Chinese tourists swung back into a double-digit decline of 14.4%, against a 0.1% drop posted a month ago.

Clothing and department store items were some of the brighter spots showing an increase in sales by 4.1% and 1.7% respectively. Sales of cosmetics and medicine remained in negative territory for the second month in a row, shrinking 3% on the year.

A government spokesperson noted that the weaker retail market in November was “conceivably dragged by the reduced tourist spending on some big-ticket items.” The number of mainland tourists to Hong Kong stabilised at a 3.5% year-on-year decline in November, the same as a month ago. While the fall in overall tourist arrivals narrowed to 2.1%, the number of higher-spending overnight visitors was down 16.4% on the year.

Without giving details, the government announced on Tuesday it will shore up local consumption to relieve pressure arising from a stronger Hong Kong dollar and uncertainty over the trade policy of U.S. President-elect Donald Trump.

While offering incentives such as tax rebates for residents might be good news for retailers, Cheng said the real impact remained to be seen. The boost from local consumption during holiday seasons was muted as consumers were “less enthusiastic” about initial promotional sales these days and tend to wait for steeper discounts amid a slowing economy.

Cheng expects retail sales to bottom out in 2017 with at worst a low single-digit decline and rules out another wave of downsizing by retailers. “They should have done what they could do for now after numerous closures and layoffs,” he said. 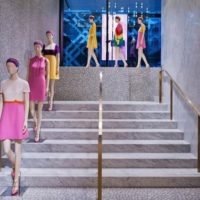