Chiara Ferragni is taking her digital brand to retail outlets.

After opening locations in Shanghai and Chengdu this year, Chiara Ferragni and her shoe collection has inked a deal with Riqing Group for a mass retail rollout in China.

The footwear brand Chiara Ferragni Collection, owned by the Blonde Salad blogger of the same name, plans to debut 35 mainland stores there in the next few years.

Much like the debut Chiara Ferragni store in Milan, which opened this summer in Italy, the China stores will be decked out in Ferragni’s signature glitter motif and will conjure the concept of ‘airport life.’

“When I travel, I always post pictures of me and my looks outside the airport. It has become sort of a tradition now, and my followers really relate to that,” Ferragni said.

In 2016, Chiara Ferragni reported revenues of 17 million euros ($20 million). In June, online sales were up 235%, compared with the same month a year ago.

SEE ALSO : Who are the influencers driving watch sales?

“We have been testing new markets and increasing brand awareness,” Lorini said.

During the past several seasons, Chiara Ferragni Collection has launched pop-ups and exclusive styles with key retailers, including Level Shoes in Dubai, Luisa Via Roma in Florence, IT Hong Kong, Le Bon Marché in Paris, Saks Fifth Avenue in New York.

The collection is stocked in nearly 400 stores globally. EXCLUSIVE INTERVIEW WITH GOOGLE: A smarter retail needs us all!
Next Article 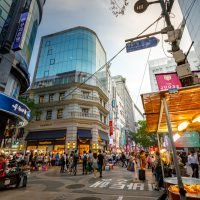