The mall is CRCT’ 11th in the country and its first in Chengdu, the provincial capital of Sichuan in western China.

Its acquisition will enlarge CRCT’s portfolio size by about 14 per cent to RMB12.55 billion (S$2.55 billion). The mall has a current net property income (NPI) yield of about 5.4 per cent and is expected to add to CRCT’s distribution per unit (DPU).

Said Mr Tony Tan, CEO of of the trust’s manager: “With the opportunity to tap on CapitaLand’s network of five existing malls in Chengdu, the proposed acquisition is aligned with CRCT’s investment strategy to expand our footprint by leveraging on our sponsor’s strong presence in key Chinese cities where it has a competitive edge.”

The Galleria is located in Chengdu’s Gaoxin District – a prominent hi-tech zone ranked fourth among 146 national-level hi-tech zones in China. It is home to about 100 Fortune 500 companies, including General Electric, IBM, Amazon, Microsoft and Intel.

In 2015, Gaoxin District registered RMB51.6 billion (S$10.5 billion) in retail sales, representing a year-on-year increase of 11.7 per cent, the highest growth rate among all districts in Chengdu.

The mall has been valued at RMB1.52 billion (S$309.0 million) Including acquisition-related expenses, the total investment cost for the mall is expected to be about RMB1.53 billion (S$310.4 million), said the trust’s manager. 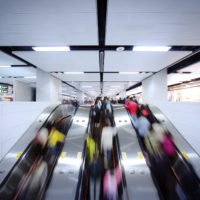 Asian shoppers most hooked on m-commerce and crowdsourcing