Alibaba Group Holding has surpassed Tencent Holdings and China Mobile in market capitalisation, leading the charge of so-called new-economy companies to occupy the top echelons of Asia’s most valuable corporations.

Alibaba’s market value rose to US$261 billion on Friday in New York, overtaking Tencent’s US$255.98 billion capitalisation on Thursday in Hong Kong during a trading week shortened by a public holiday. China Mobile was the region’s third-largest company, valued at US$249.38 billion.

“Many international investors are eyeing the rapid growth of e-commerce in China and the internet business in Asia,” said Louis Tse Ming-kwong, director of VC Brokerage in Hong Kong. “That’s why Alibaba and Tencent have become their favourites.”

Alibaba’s shares have risen 28.8 per cent this year to US$104.64, making the operator of Taobao.com and Tmall e-commerce platforms the world’s 10th-largest company by value, according to Bloomberg data. The world’s five most valuable companies now owe their revenues to technology or the internet: Apple, Alphabet, Microsoft Corp, Facebook and Amazon.com. The same goes in Asia, where technology and internet-related businesses – the new economy – have displaced oil refineries, manufacturers and banks in the top three spots.

Besides Alibaba, Tencent and China Mobile, Samsung Electronics of South Korea is the other technology company among Asia’s 10 most valuable corporations, valued at US$191.76 billion. Toyota Motor Corp occupies the sixth spot, with US$191.37 billion in value.

PetroChina, the country’s largest oil producer, is the sole resources-related company among Asia’s top 10, occupying the seventh spot with US$190 billion in capitalisation.
China’s state-owned banks occupy four of the top 10 slots, led by the Industrial and Commercial Bank of China, at US$230 billion.

The shares of new-economy companies would be in a better shape than manufacturers and heavy industries to weather the slowing Chinese economy, said Tse. 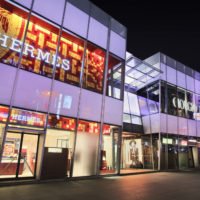 Why luxury brands must master omnichannel by 2020
Next Article