Think of sports, think of elegance.

The brand is part of  the MF Brands Group, recently rebranded, with the intention to reflect its ambition to become a major player in premium textiles and lifestyle sportswear across the globe through strong brands in the sport and fashion worlds.

Lacoste’s AW20’s fashion show is the epitome of elegance and sports, there is no longer need to compromise between conform and classy.

A powerhouse on and off the tennis court, René’s unrelenting thirst for excellence, his dedication and verve was matched by none other than his wife Simone Thion de la Chaume – herself a champion golfer. Together, they reflected the very definition of a sporting power couple.

Louise Trotter celebrates the harmonies in their contrasts, and the beautiful ricochet of references between her sport and his. By applying modern technology to the sartorial aplomb of a century ago, a fresh sense of sportif style rises to the fore. Future classics are imbued with the timeless élan of Lacoste’s French heritage.

Designed for elegance and performance – at leisure or play – the collection exudes a consummate and athletic ease. Lacoste green and navy are joined by clay court browns, spearmint, sky blue, candy pink, orange, lemon and tan, in a lively palette that recalls our collective memories of weekend tournaments, friendly matches, and the off-duty uniforms of the sporting elite. Comfort and ease is the luxury of today: bringing the focus closer to the body, sports blazers and trousers are tailored in technical jersey and shell knits and brushed pullovers play with the structures and scale of Prince de Galles, houndstooth and Vichy checks.

Pulled from the lexicon of French pop culture, the Lacoste crocodile peeks out from jacket linings and a pastel all-over print, as tennis skirts in Japanese jersey are worn with racket and club print silk blouses, and boxy polo styles feature chunky knit collars, contrast plackets and leather trims.

Designed by René Lacoste, the original L1212 polo is elevated in a double-knit mercerized cotton. Premiering at the Autumn Winter 2020 fashion show, it is featured in a fly poster campaign at the Tennis Club de Paris worn by the season’s runway cast and photographed.

The chipboard used as a canvas for the show will be donated to La Réserve des Arts, a French association that sources used materials to give them a second life. The benches will be re-used during upcoming Lacoste events. 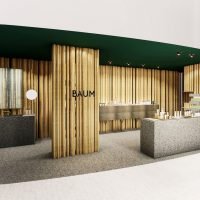 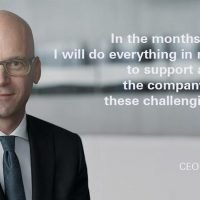